8. LOS ARCOS - Your Home While You Are Here 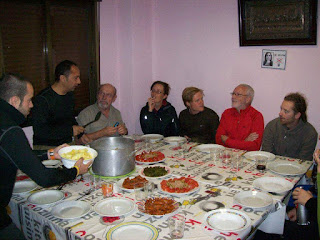 On Saturday I headed off for whatever destination I could make. Not  far from Estella I saw a figure coming down the hill to the left of the track I was following but I didn’t recognise Alfred until he caught up with me. Together again! He had slept out on top of the hill in his coffin tent and got to gaze into the eyes of the sky, an experience that few of us had the privilege of experiencing - or the courage.

The ground was heavy mud and the going tough and my energy was low after yesterday’s long walk. We got to Los Arcos in the rain at around noon and went for a coffee. In the bar we smiled at a lone female pilgrim who would enter our path later. She is Kathrin from Germany.

True to his nature Aelfred went further but I booked into the Austrian Albergue where I was welcomed with a cup of soup and was told “this is your home while you are here”.

In the dormitory in the bed next to me on my right was a lady from Korea and on my left was Christine from Switzerland. Michael from Germany was in the bunk near the door. Then came in a young man dressed in white and beige, wearing a wide brimmed hat and sporting a long pony tail. He shook hands with me and introduced himself as Brend from Holland.

It was a very homely place with a lovely old living room that had a stove burning. After a rest and shower I went to sit there with my book. Brend was playing guitar, Mark was going in and out making phone calls to home. Others were sitting at the big tables doing various things and some were on internet. 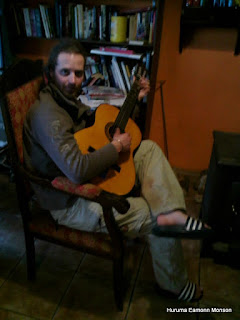 Harold arrived and told me that the Spanish family were cooking dinner and if I would like to join I could pay €2 and he brought me to meet them announcing that I was a missionary from Tanzania.

Twenty of us sat down to that meal around a square table and I was squeezed between Mark and Brend who asked if he could put his meat on my plate because he is vegetarian. Becky (Mark’s wife) was very respectful of me as a priest and asked if I thought that the place where we find ourselves on the Camino is where we are meant to be. I said yes, not realizing that my being with them was meant to be and  a very significant part of my journey.

Pedro the policeman couldn’t understand why I would not take wine and he said “you cannot be a pilgrim without drinking wine.”  I smiled! Becky asked if I would say a prayer at the end of the meal to bless our night and the day to come. Harold, who says he has no faith, translated and was surprised by the familiarity we used in speaking to God. He expected it to be more formal.

This was one of the loveliest evenings of the Camino and after dinner I suggested that we who had not cooked should do the dishes. A twenty year old German Marcus joined me and some others.

Posted by Huruma Eamonn Monson at 9:47 AM No comments: